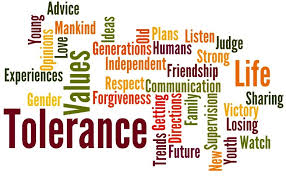 Tolerance and civility in the way we behave.

In the last two weeks I have seen monumental arguments brewing up over what is going on in the world. Some quite shocking comments have been banded around in response to seemingly civil status updates from friends of theirs.

Despite all the attempts to pigeonhole groups of society demographically as to which way that section of the country voted, there is no hard and fast rule as to which way people have voted.

In the papers, they’ve said that the younger voters were voting to remain, while those who had retired were voting to leave. They’ve said that those in the north east wanted to leave, but those in London wanted to stay. While there may have been a clear majority of voters in those areas who did vote like that, there were still many who voted the opposite way in those areas.

It is the lack of tolerance and understanding that has really surprised me though. While one side was always going to be on the side where their choice wasn’t the way that the majority wanted, I would have thought, or rather I would have hoped that the reactions and responses would have remained civil.

We have all seen that the personalities of those at the top campaigning either way being ripped apart and insulted beyond belief. They each had one vote each, it is up to the individuals who are voting to work out for themselves their viewpoint. Being nasty and horrible about people, just because you don’t like their viewpoint or their method of delivery isn’t the way that society should behave if they have any degree of decency.

I’ve seen lots of dramatic posts about what is going to happen to the UK now that the EU membership is changing. I’ve been impressed that many people have decided to hold back from commenting and replying if their viewpoint is different. Ranting is one thing, but it doesn’t change the fact that we are where we are, and that we need to work out a way forward from where we are. There were enough opportunities for people to put across rational arguments (for either side) before the referendum day. I wasn’t very impressed with either campaign if the truth be known.

The result of the referendum has seen some very lowlife behaviour from certain people in the country, thankfully from no one that I actually know. There has been an increase in reported racism. There has been areas of the country where some people have felt unsafe and unwanted in their areas. These behaviours are just not acceptable in what we claim to be a civil society where we should be proud of the mixed diversity of modern day Britain. It is making me wonder if Britain really is that tolerant anymore?

The leadership challenge for the Conservative party has shown that again people cannot make a simple statement without having someone jump on their high horse and comment on it in a negative manner. I saw a female friend posted on social media that there was going to be a second female Prime Minister for the country and how that was a good thing. Someone responded that neither of the two candidates would be good for the country and that they had values that weren’t positive. This was expressed in much stronger language though and was way over the top in its tone.

There are many posts that start as positives that end up getting hi-jacked and turned into negatives. I don’t see the value or reasoning as to why people do this. I do wonder on the motives of some people whether they try and dampen any kind of enthusiasm or positivity with their own negative viewpoint of the world.

Acceptance and holding back on commenting

Do we not know when to bite our tongue and keep quiet anymore? Do we not know that we don’t have to offer an opinion on everything? There are times and places for most debates or discussions of viewpoints and we aren’t going to agree on everything all the time. Seeing that a friend has one view point that could be the polar opposite of your own, doesn’t mean that you have to try and convert them, correct them, or to convince them of your view.

Acceptance that we are going to see things differently is what is needed a lot of the time. I very often see posts on social media where I don’t agree with it, but I don’t feel the need to add fuel to the fire. In regular day-to-day life, I will also hear opinions that I don’t agree with. I won’t always offer my opinion or view, it isn’t likely (or my place) to try and change the view of the other person so what is the point? I am certainly not right all the time, despite me having my viewpoint which I may feel certain about its validity. I would like to think that most of what I believe in has some amount of background and substance. It doesn’t denigrate the validity of the other person’s opinion.

Before we jump in with the negativity, why can’t we just take a moment to have a deep breath and ask is it really worth it? I’ve heard people described as being very straight talking. They very often think that this is a good thing how they say what they think. I don’t think that is a good thing at all – not by a long shot. Some ‘straight talking’ people aren’t very considerate or thoughtful about what they are saying. They may hurt the feelings of other people or inadvertently or even deliberately look to reduce the value of the other person’s viewpoint rather than just have a difference of an opinion. People who have the decency to think before they speak are less likely to cause offence to those they are conversing with.

How not to make a good impression

I once met someone at work who within the first five minutes of meeting had said that he had an Android phone and that iPhones were terrible and everyone who had them were stupid. He didn’t know what phone that me or my colleagues had or our viewpoints on the two types of phone. He was a very straight-talking person but with no thought for others before he proffered his opinion, carrying an arrogance that his view was the only one worth having. He soon got the back up of his colleagues from this approach and he didn’t last long within the team operating like that.

A society with civility as its backbone treats people with respect, even though there may be underlying differences of opinions and viewpoints. That respect helps build a better cohesion within the society. In the uncertainty that is self-evident in the UK at the moment and over the coming months, we are going to need to develop better cohesion, greater respect, and to remember that it is civility that keeps communities working together and to adopt a greater level of understanding and to work together for the benefit of the country.